Back to User Guides

This article addresses some common questions about how the plugin fetches images from RSS feeds.

The plugin imports all images to the media library.

Yes, you can import images from each RSS feed.

It can be imported in two ways:

Note that it's possible to add the image both as featured image and to the content of the post.

Can I Import Images From Any Feed?

In order to download images from a feed, the website that manages the feed must choose to enable this. If it chooses to somehow restrict access to the images, no image will be fetched.

Which Image Can Be Set As The Featured Image?

Only the first image found in the RSS feed item can be set as Featured.

How Do I Enable Featured Image Import?

When creating or editing a feed, you can choose whether to set featured images or not. In the Edit screen, check the Post Template (Export) meta box for the following option: 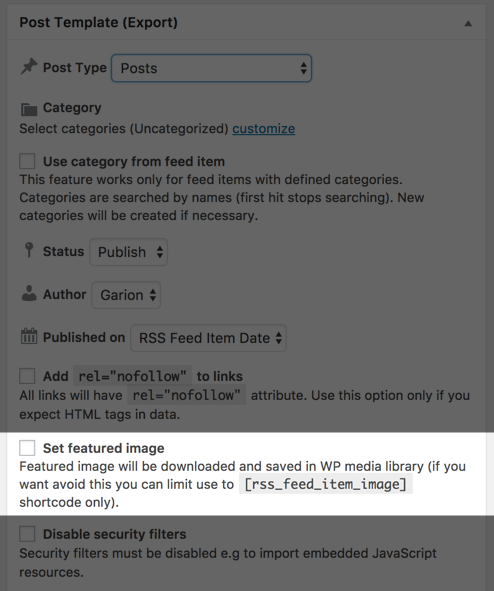 For more information, read the tutorial  Choosing Where and How Will The Feeds Be Posted

Note: From release 1.4.7, we added a new option, "Exclusive use of default image". When this option is selected default image will be set as featured image despite the presence of any image in the fetched article.

You can add the fetched image anywhere inside the post by using the shortcode [rss_feed_item_image].

The shortcode has three optional attributes:

Example with all attributes:

When you edit a feed, you will find the  Processing Settings (Import) meta box. It allows you to set different default values for these parameters, as highlighted: 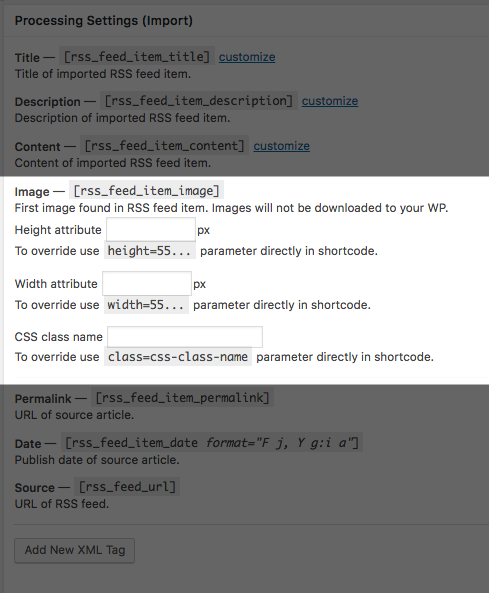 If no image is shown despite proper configuration, please check the  Troubleshooting Guide.

Did this answer your question? Thanks for the feedback There was a problem submitting your feedback. Please try again later.
Last updated on November 28, 2020